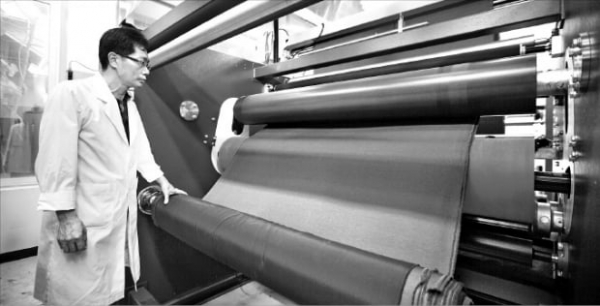 There is a component which we depended on Japanese Mitsubishi completely and now Korean corporation is exporting to Japan inversely. It is ‘single-facer felt’ that is used in the process in which corrugated boxes are produced.

Korea Textile Development Institute has pushed ahead the localization of high-performance textile products through ‘super fiber demand connections reinforcement project’ since 2015. Once corporations manufacture products, demanding companies of vehicles, electricities and electronics can be connected to verify performances and purchase. From 2015 to 2018, it supported 98 corporations and recorded the sales of 69.6 billion won.

Bowoo specializing in fiber felt for industrial use secured the market using this business. Bowoo succeeded in producing felts at the end of Bowoo’s research and development for 3 years. In fact, Mitsubishi has monopolized single-facer felt in the world market.

Bowoo succeeded in not only producing single-facer felt domestically, but also securing a competitiveness getting rid of seams. Korea Textile Development Institute supports demonstrating trial manufactured goods developed by Bowoo enhancing localization ratio. Bowoo seized an opportunity that period of delivery of single-facer felt, using organic fiber, was delayed because of Japanese export regulation. Bowoo official whom it may concern said, “single-facer felt costs about 30 million won~50 million won per piece but it is a consumable parts that have to be replaced every 3~6months.” “The number of corporations is not small who prefer domestic goods at a relatively low price and a short delivery period.” Bowoo is propelling exports to Japanese paper companies as well as China and America.

Foam sheet is also a material that is achieving localization results in the textile field. Foam sheet is inserted inside electronics such as TV and cellular phones which plays a role as a airbag relieving the shock in transit and use. There is a problem where electronics get thinner and smaller, manufacturing technology of foam sheet, inserted inside electronics, becomes more fastidious. RIC that America and Japan collaborated has launched foam sheet, thinner and better for its resilience and has raised the entry barrier of latecomers after preoccupying the world market of foam sheet.

Dyetec Institute and Dooroo Celltech, specialized production company of foam sheet, have gone into development microcell polyurethane foam sheet development through government’s R&D business since 2013. They developed high resilience polyurethane thin film foam sheet of 130㎛ and started to substitute Japanese products in 2017. They got to the top of world market share producing foam sheet below 100㎛ for the first time in the world which adds shield function of electromagnetic waves.

The evaluation that they take a preemptive action to restrictions on overseas environment developing environmentally friendly textile materials comes out. EU has been intensifying environmental regulation that if the proportion of recycled materials falls short of 95%, car sales can’t be available. Dyetec Institute and Hoshin Textile have participated in specialized material technology development business since 2016 and have succeeded in developing Kenaf composite materials for internal components of vehicles in over two years. The contract is in progress that Hoshin Textile will supply interior materials for Danish electric cars from 2021.